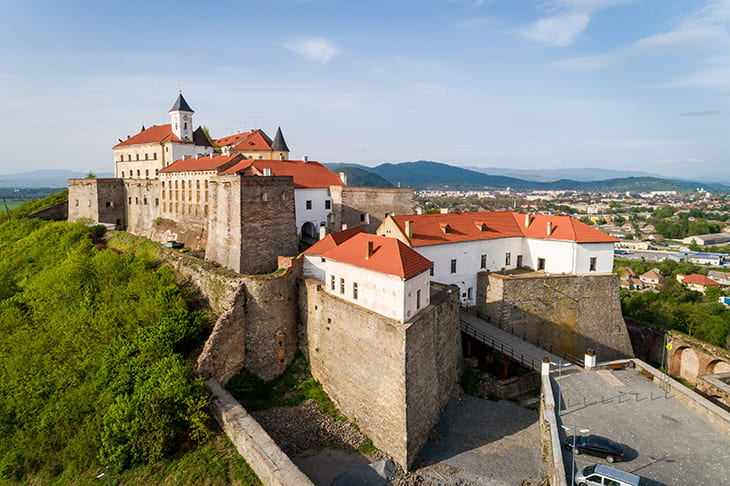 A lot of tourists chose rest in Transcarpathia for excursions its famous castles. All of them remain histories about love, brave defense, courage and cunning. We prepare interesting information about famous castles for you. We hope that after our article you want to see it by yourself.

This castle is located in Mukachevo and hide a lot of riddles and secrets. Palanok is one of the oldest Ukrainian fortress - stone fortifications on the mountain of volcanic origin appeared here in the XI century. Despite this, castle almost completely preserved and is landmark of the Mukachevo city. Behind the walls of future castle locals escaped during the attack of nomadic tribes of polovtsi.

Upper castle is the oldest and was built in ХІV century, after in XVIII century it was rebuilt. It is located on the top of the mountain, so it offers incredible views on Mucachevo city and surrounding areas.

There was not only one owner of the castle, and all of them made a lot of effort to build it. But the most famous owner was Prince Fedir Koryatovych. He turned the castle to his residence. During the reign of a Prince there was built deep well (85m)/ Its creation took several years, because get to the water, you had to dig the whole volcanic mountain. It was almost a miracle in that times. So, there is belief: if you throw a coin, your wish will surely come true.

Rest in Transcarpathia - Hunting residence of the Schönborn.

Schönborn Palace is a former residence and hunting lodge of counts Schonborn. From 1946 there is sanatorium “Carpathians”. The palace was built in 1890-1895 by Count Erwin Friedrich Schönborn-Buchheim Every year thousands of tourists come to the castle to look at the palace, which seems to have descended from the pages of knightly novels. The castle is surrounded by a beautiful garden, broken during the construction of the complex; it impresses with a large number of green lawns, paths and rare plants. Walking through the castle don’t forget to:
- see exotic trees
- take a rest on the shores of small lake on the garden lawns
- Enjoy original bas-reliefs and unique stained glass windows of the fortress.

Serednyansky Castle is located in Serendnje village, between Uzhhorod and Mukachevo. There are a lot of legends about creation of it. One of them is associated with Orden of Tamplars. It is said that a castle belongs to them and was the northern possession of the Orden In Europe. Representative in Tamplars is considered to bethe founders of Freemasonry and esoteric science. According to one of the legends in Serednyansky Castle tamplars hid a Holy Grail. But researchers deny this legend. Archeologists believe that castle was formed in the end of XV century, not in XIII. The castle was owned by the noble family Dobo. The famous member of the family was Ishtvan, who come to Serednje during one of the warriors. With a help of the captured Turks, he rebuilt the castle as well as expanded the wine cellars. And still, tourists, who have chosen the rest in Transcarpathia come here for wine tasting. Serednje village is one of the centers of winemaking in Transcarpathia.

This is the oldest and the most valuable historical and architectural building of the Uzhhorod city, which was built in XV-VVIII centuries. The castle stands on the edge of the northern slope of the Castle Hill and is a two-storey building in the Renaissance style. Thanks to the strong fortifications in case of capture by the enemy, the castle could defend itself. At first, Uzhhorod Castle was suspended, now a wooden bridge has been built on supports.
An interesting fact: in 1646 the Uzhhorod Union was adopted in the castle church. The foundation of the church has survived to our time.
Uzhhorod Castle is famous for its tasting room, where wine lovers must go during their vacation in Transcarpathia. The tasting room features wines from local private winemakers and light snacks.

The building, dating from the XIV century, is located in Chinadiyevo. At first glance, this is an impregnable fortress, but its walls retain many romantic stories. Castle of Love - why is it sometimes called St. Miklos? The name is associated with the life of Ilona Zrini, an incredibly beautiful princess who met her beloved, young Turkish count Imre Tekeli, in the castle walls.
Neither political conflicts nor the age difference prevented this love (Imre was 14 years younger than Ilona). If you make a wish in the princess's bedroom, your personal life will be fine! Here for tourists night excursions, master classes, festivals "Silver Tatosh" and "Love in St. Miklos" are spent.

If you visit a castle:

• you will be enchanted by the interior decoration of lobbies and halls;
• learn the mystery of the name of the fortress;
• Visit the Museum of Scythian Culture, located in one of the rooms

Want to see the castles we wrote about? And still have a rest in the heart of Transcarpathia? We are waiting for you!
Our SPA Hotel offers stunning mountain views, fresh air and spring water. The hotel offers wonderful recreational facilities such as pool (lounge), pool (kids) to make your stay truly unforgettable. You can eat deliciously in two restaurants serving Ukrainian and European cuisine. There is entertainment for both children and adults on site. Nearby are popular ski slopes, Lake Synevyr, brown bear rehabilitation center and legendary and mysterious castles of Transcarpathia.

Your message has been sent!
We will contact you shortly